Hello again! This is Megan and I am back today to share an interactive card with you that has a fun twist. I used the Slimline Pull Tab Die Set to create a pull tab slider card on a standard A2 sized card. Also, instead of only one image moving with the slider, there are three! 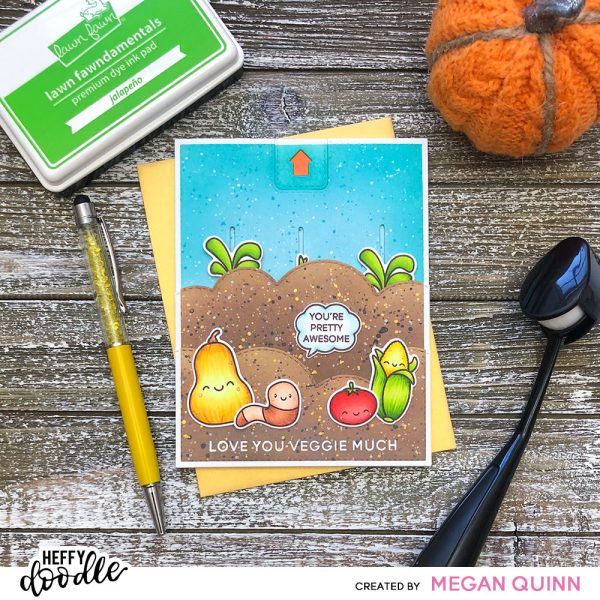 I wanted to create a sweet little garden. I used images from the Veggie Patch, Big Bug Hugs, and Whatcha Sayin’ Stamp Sets to create my scene. To begin, I stamped the images using an alcohol friendly ink onto white cardstock and colored them using Copic Markers. I used the coordinating die sets to cut the images out. 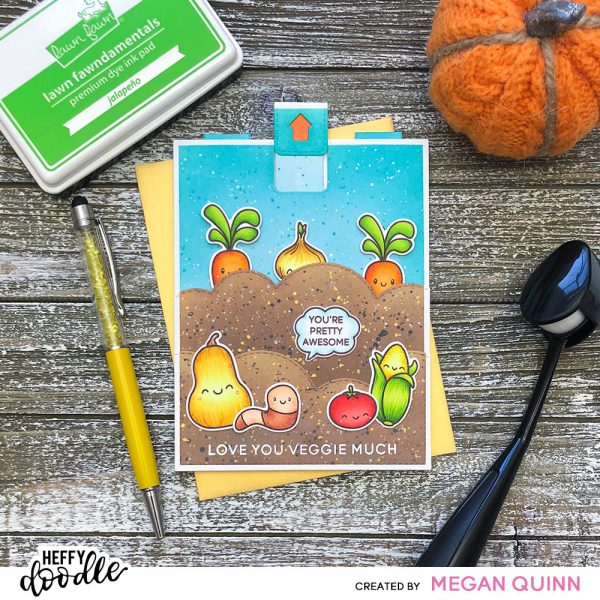 Next, I die cut the pieces for the scene building panels and pull tabs from Bristol Smooth Cardstock. To give the illusion of dirt, I used the Silver Linings Cloud Border Dies. I then laid the dirt panels over the sky panel to line up the dies to cut the tracks for the veggies to slide on. (It is important to make sure that the images have enough room to slide up without going too far.) I repeated that for each of the three veggies. I also die cut the notch for the pull tab from the top of the panel.

To color the scene panels and pull tabs, I masked off the edges using Heffy Memo Tape and blended on Distress Oxide Inks in the following colors: Tumbled Glass, Peacock Feathers, Antique Linen, Vintage Photo, Gathered Twigs, and Black Soot. I then flicked the panels with watered down Peacock Feathers and Copic White on the sky portion and Gathered Twigs, Black Soot, Copic White, and Gansai Tambi Starry Colors Metallic Watercolor Paint on the dirt. The flicks of color add an interesting texture to the scene. 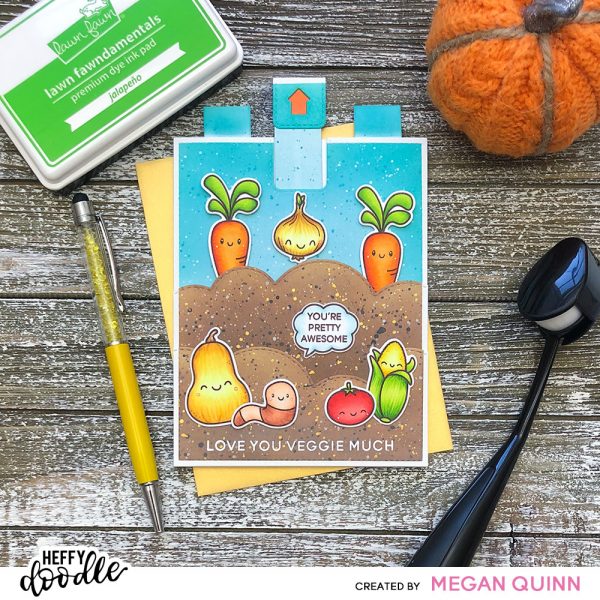 In order to make the design have three moving images with one pull tab, I die cut three pull tabs. I fed them in from the back and then attached them together using a strip of cardstock and double sided tape. I then used the die cut from the Slimline Pull Tab Die Set that ensures the pull tab does not move from side to side on the back to anchor each pull tab to the back of the front panel.

I attached all of the images to the pull tabs and the front of the card using glue dots and double sided tape. To finish off the design, I heat embossed a sentiment from the Veggie Patch Stamp Set.

I hope that you have enjoyed my card for today and thank you for stopping by the Heffy Doodle Blog! Until next time, happy paper crafting!