Hello, Heffydoodlers! I’m back today with the next installment in my Clean and Simple series. I’ve been using the Masquerade Stencils as a frame to create some Copic coloured scenes, showcasing a variety of the Heffy Doodle stamp sets. Today’s scene card features the Ad-roar-able Lions and Classic Sentiments stamp sets with the Square Masquerade Stencil. I created my own custom cave background to create this scene. 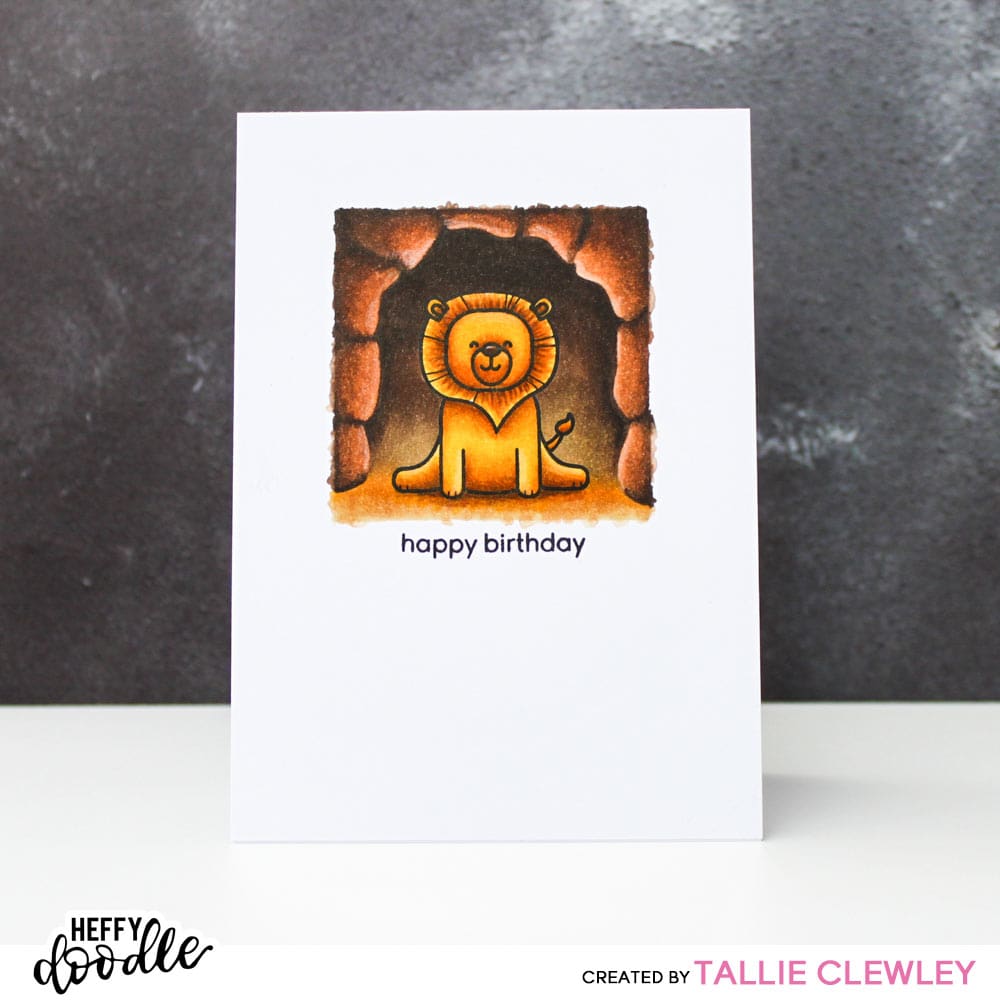 I started out by lining up an A6 card panel of blending cardstock with the etched lines on the Square Masquerade Stencil to make sure I had a centred aperture. I made little tick marks with a pencil in the corners so I knew where the scene ended. I stamped out the adroarable little sitting lion from the Ad-roar-able Lions set in some Memento Tuxedo black ink. 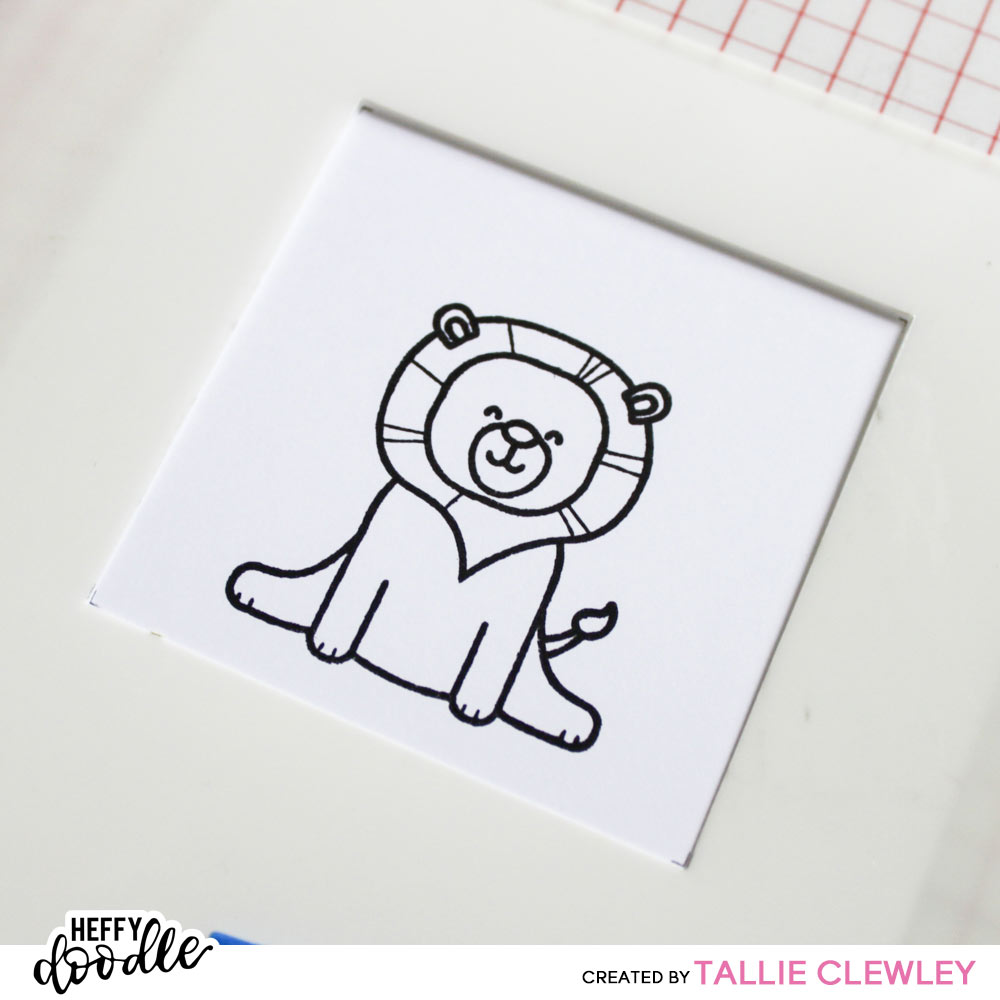 As with my last card, I used some blue painter’s tape to mask off the aperture. Make sure to take the stickiness off before sticking to your project (I didn’t do this as thoroughly as I should have and a little bit of my cardstock tore when I later removed it). I used a light marker (E000) to draw out the cave entrance in the background, blocking in the rocks. It doesn’t matter if you change the position as this is such a light colour it will get covered up. 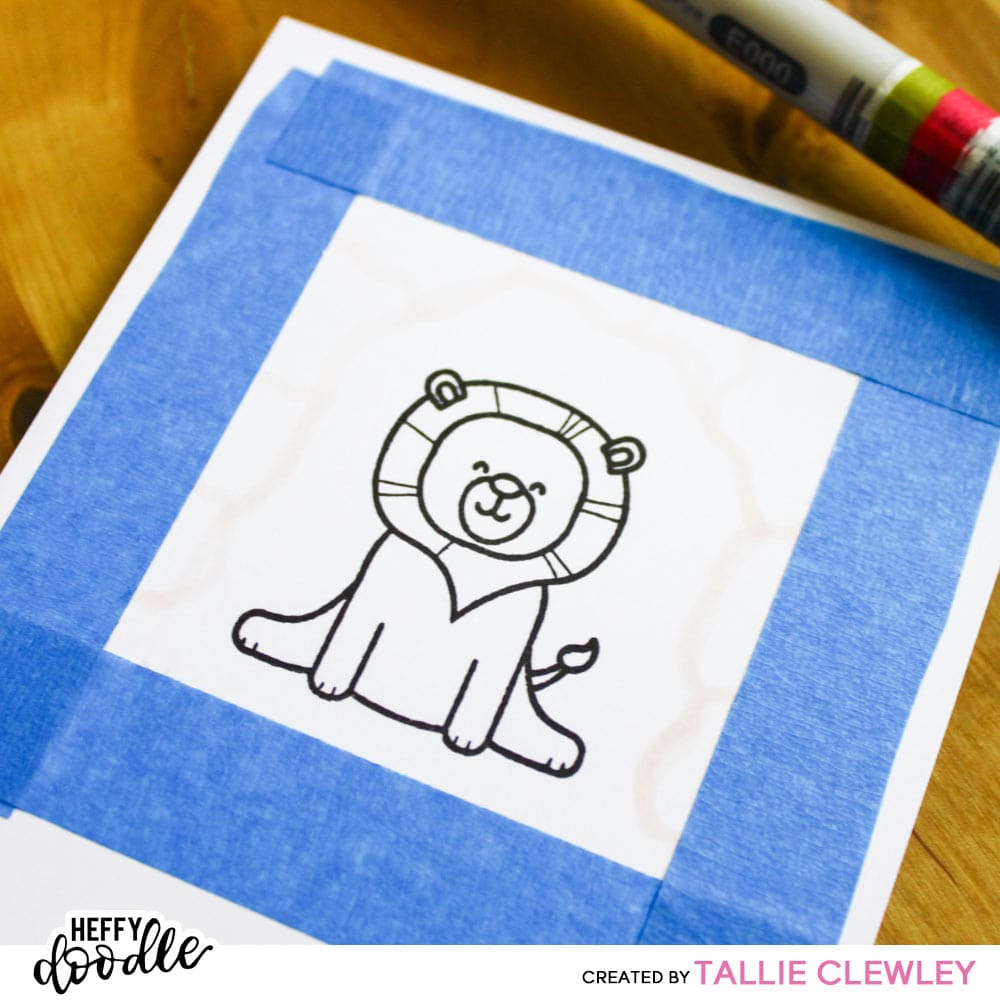 With that guide in place, I could start to colour in the scene with my Copic makers. Because we have the black lines on the stamped image, I wanted to go really dark in the background so I chose some E40s with some E30s to brighten up the blueish tones. 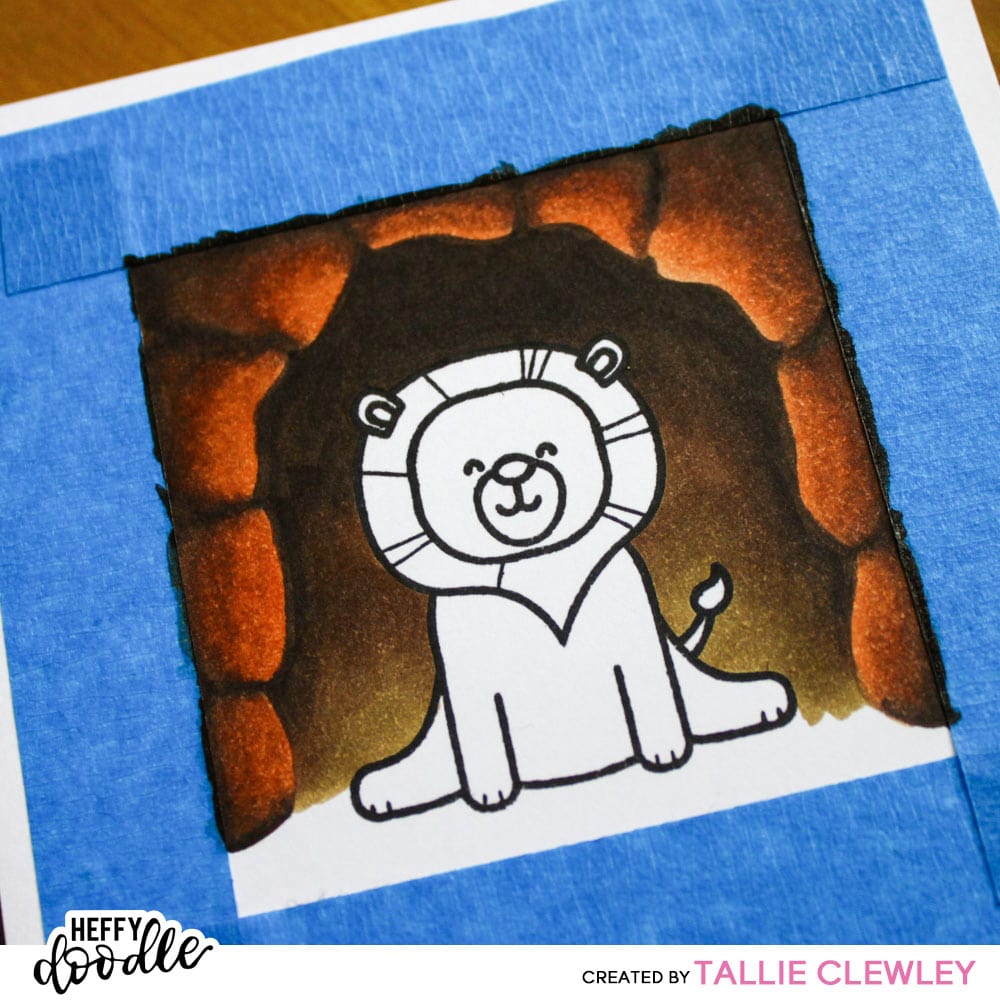 I always find tackling the mane on these lions difficult, so I started out with some simple flicks that emanated out from the centre of his face. I stepped down my markers in the same way to give the effect of a bushy mane. 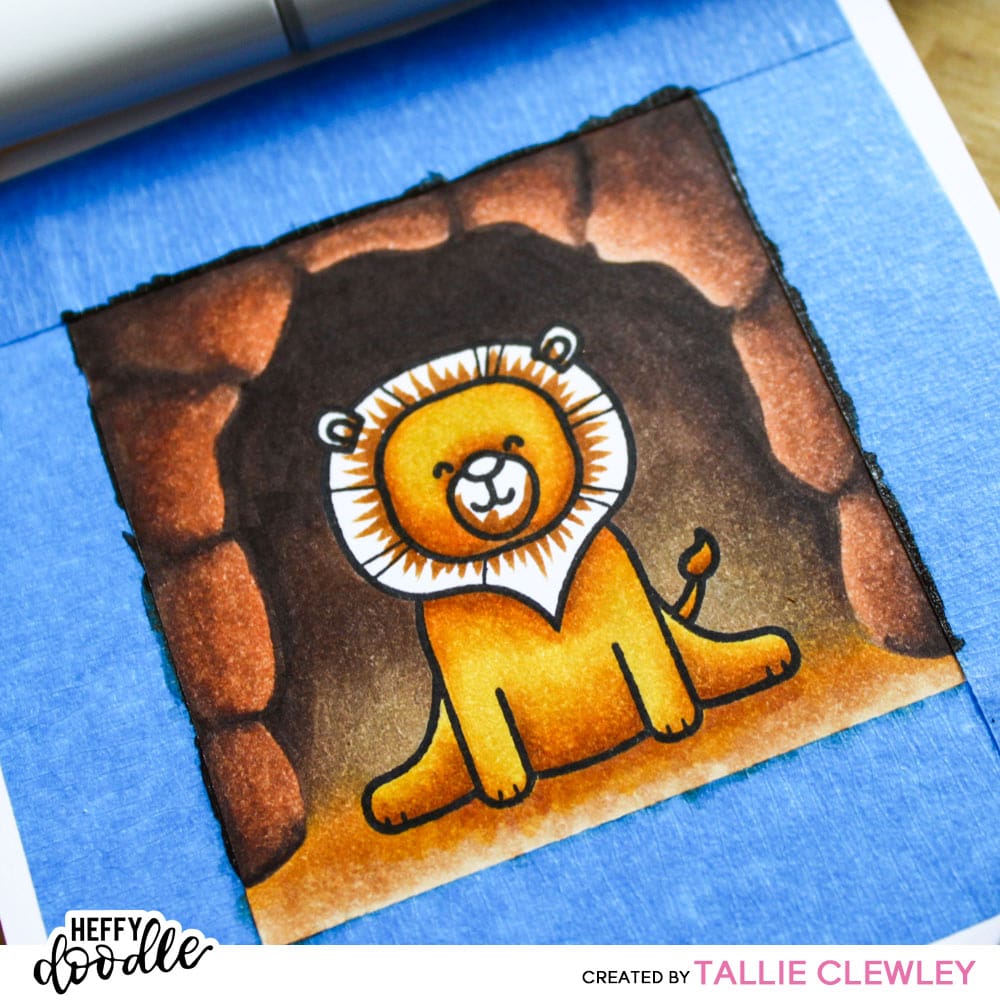 The last step was to add a simple ‘Happy Birthday’ sentiment from the Classic Sentiments set. 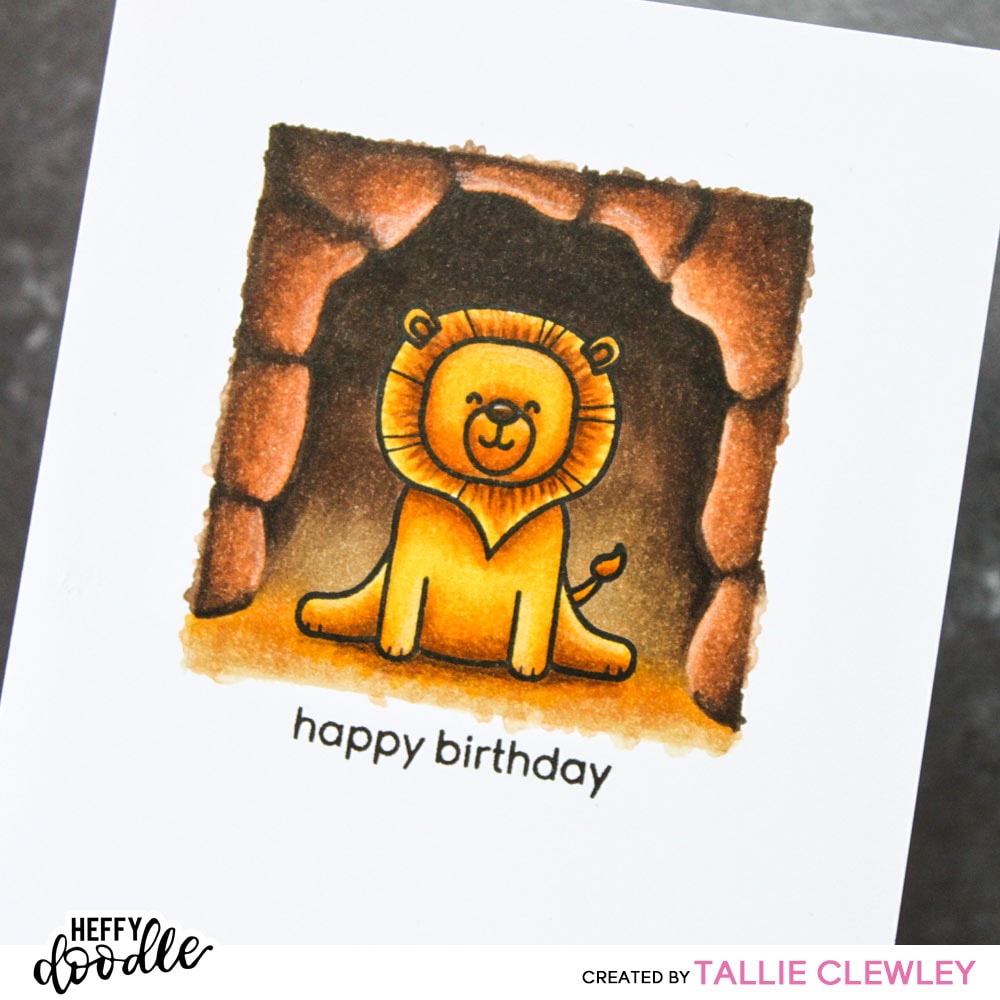 Again, I love the way the markers bleed just enough to soften the edges of the scene. If you’re not a fan, you could always die cut the scene and adhere to your card base before stamping the sentiment.

Thanks for reading – I’ll see you on the first Monday of next month with another scene installment!