Hello and happy Saturday! I’m Tallie and I’m excited to be guest designing here on the Heffy Doodle blog.

The card I am sharing with you today features the fabulous Geology Rocks (HFD|SSS) stamp set. With a layer of Glossy Accents, these gems really do sparkle!

I started out by repeatedly stamping the largest diamond on some white card, rotating until the A6-sized panel was completely covered. Using four Blue-Green Copic markers, I coloured in the gems and added some shadows with some Cool Grey markers to make it look more dimensional. Using the same BG markers I scribbled on some more white card and die cut it with the Scripty Thanks die (SHC|SSS), stacking it four layers high with additional die cuts to add some dimension. I added some Wink of Stella sparkle followed by a layer of Glossy Accents to both the gems on the top half of the panel and the sentiment, then set them aside to dry. 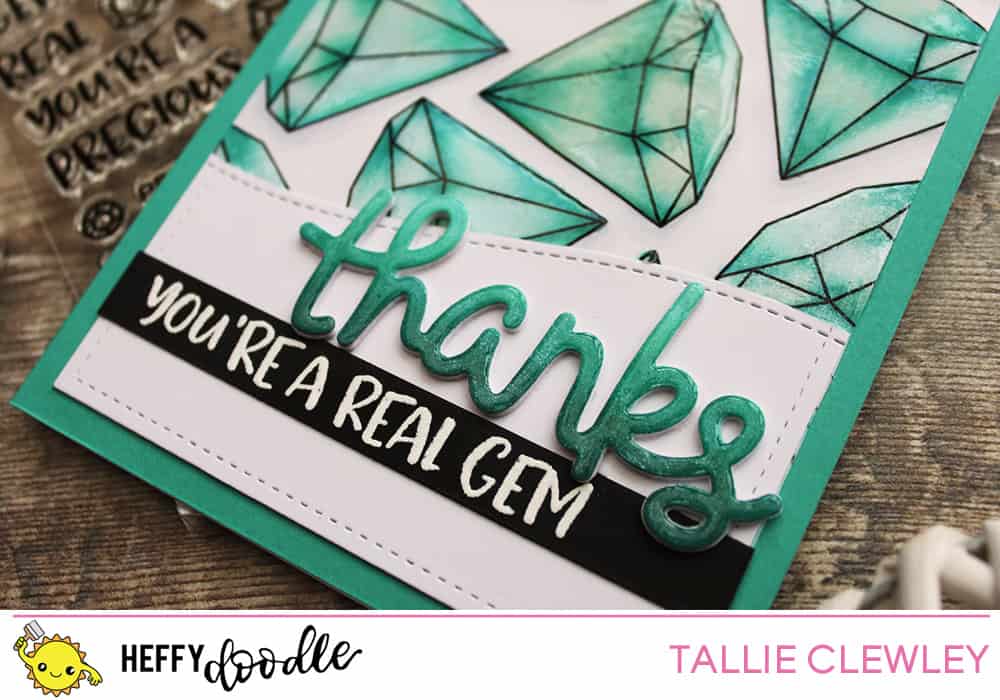 I then die cut a stitched rectangle (SHC|SSS) out of white card, further cutting it down with a stitched hillside border (SHC|SSS) for a background for the sentiment and adhered it to the bottom of the gen panel. I white heat embossed the “YOU’RE A REAL GEM” sentiment from the Geology Rocks (HFD|SSS) stamp set onto a strip of black card and adhered this and the thanks die cut to the white panel section. I finished the card off by mounting on a teal base. The finished card has lots of dimension and sparkle!

Thanks for stopping by!

What a stunning card! Love!