Thanks for stopping by on the Heffy Doodle blog. Today I’m sharing a card using the Geology Rocks stamp set from the new release. It was really fun to bring in so much color to the card! 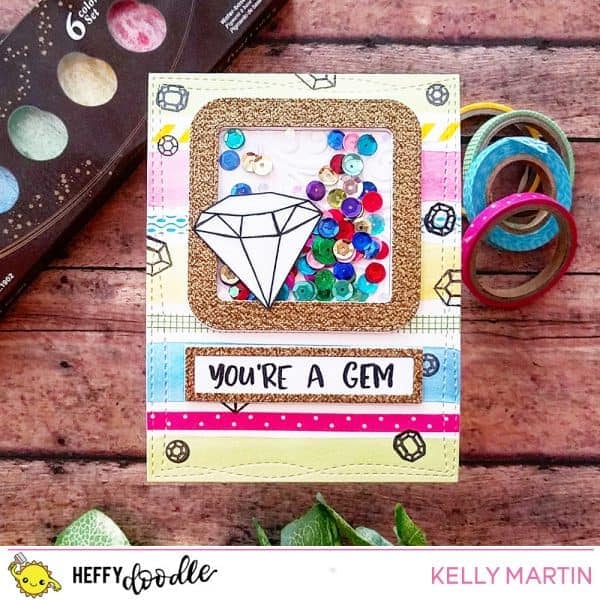 I started by taking a piece of watercolor paper and painting some colorful stripes on it by using my pearly watercolors. I then hunted around in my washi tape drawer and used some coordinating colors of washi tape to add some smaller stripes for added pattern and texture.

I then set off to making the shaker window. I used the Stitched Rounded Square Frame die from My Favorite Things and mounted the negative space from the square frame onto the card panel. I then die cut several frames out of white cardstock, and glued them on top of each other before pouring in some jewel colored sequins. I then cut a piece of clear acetate and adhered it to the top of the frame stack. Finally, I cut one final frame from gold glitter paper for the top frame, sealing off the entire shaker window.

I stamped the large diamond image from the set on white cardstock and added some light blue shades on the edges of the image to give it some depth. I die cut it and mounted it to the card panel before stamping the sentiment on the same white cardstock in black ink before trimming it out and adhering it to the bottom of the card. I then used a sentiment frame die cut from My Favorite Things to cut a matching gold glitter frame around the sentiment and glued it on to the panel.

I finished off the card by stamping the smaller gem images from the stamp set in black ink all around the background before mounting the card panel on to a standard A-2 card base.

Thanks again for stopping by!

That’s such a great card and very cheerful !