Hey there! Claudia (@mrsclocards) here with this super cute Halloween card featuring the Purrfect Day and Absotoothly Awesome stamp set and dies. Did you ever wonder what could happened if a witch’s cat feels lonely and steals its mistress’ magic wand? Here it is!

I really went out of my comfort zone with this project: this is the first Halloween card I ever made, in fact I do not own a single Halloween stamp set! I also rarely make interactive cards, but I was really curious to try out the Mini Double Slider die and, after watching a Heffy Doodle IG live, I knew I had to make a Halloween card at last!

I started this project with the background, since I wanted to test out how the green inks would look. I used the biggest Imperial Stitched Rectangles die on two pieces of Heffy Doodle white heavy cardstock: on the first one I placed the mask for the Moon (which I made by using a 1 1/2” circle die on a piece of masking paper) on the center and I ink blended Distress Oxide Twisted Citron, Mowed Lawn and Black Soot. I used the same inks on the bottom part of the second rectangle and later used a grass border from the Grassy Lass Border die to cut it out; at this point I splattered the pieces with black or white watercolors and set them aside to dry.

For the tree, I took a piece of Heffy Doodle black cardstock and cut the Treemendous Peekaboo Tree die, then I turned it around and used the Woodgrain Texture Cover die over it. 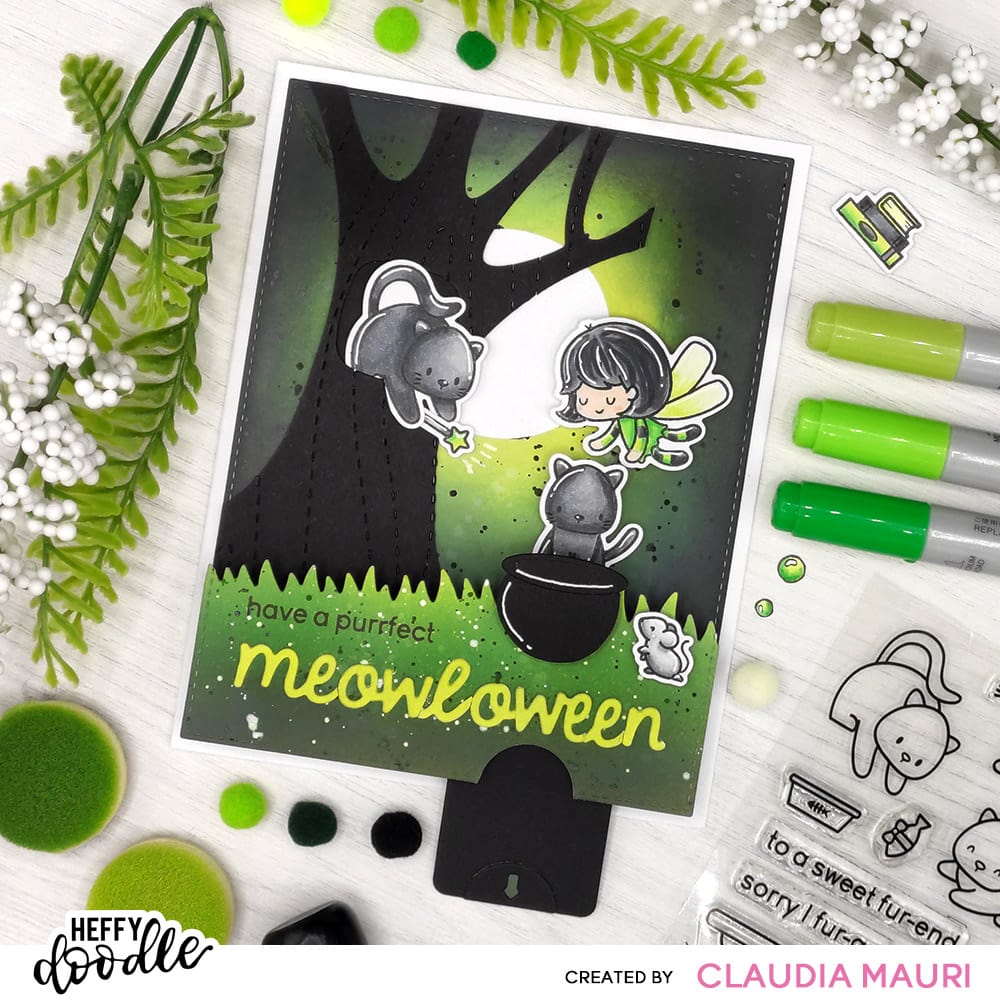 I added highlights with a white gel pen and I die cut the images with the Absotoothly Awesome, Purrfect Day, Deer to Me and Highland Honeys coordinating dies. 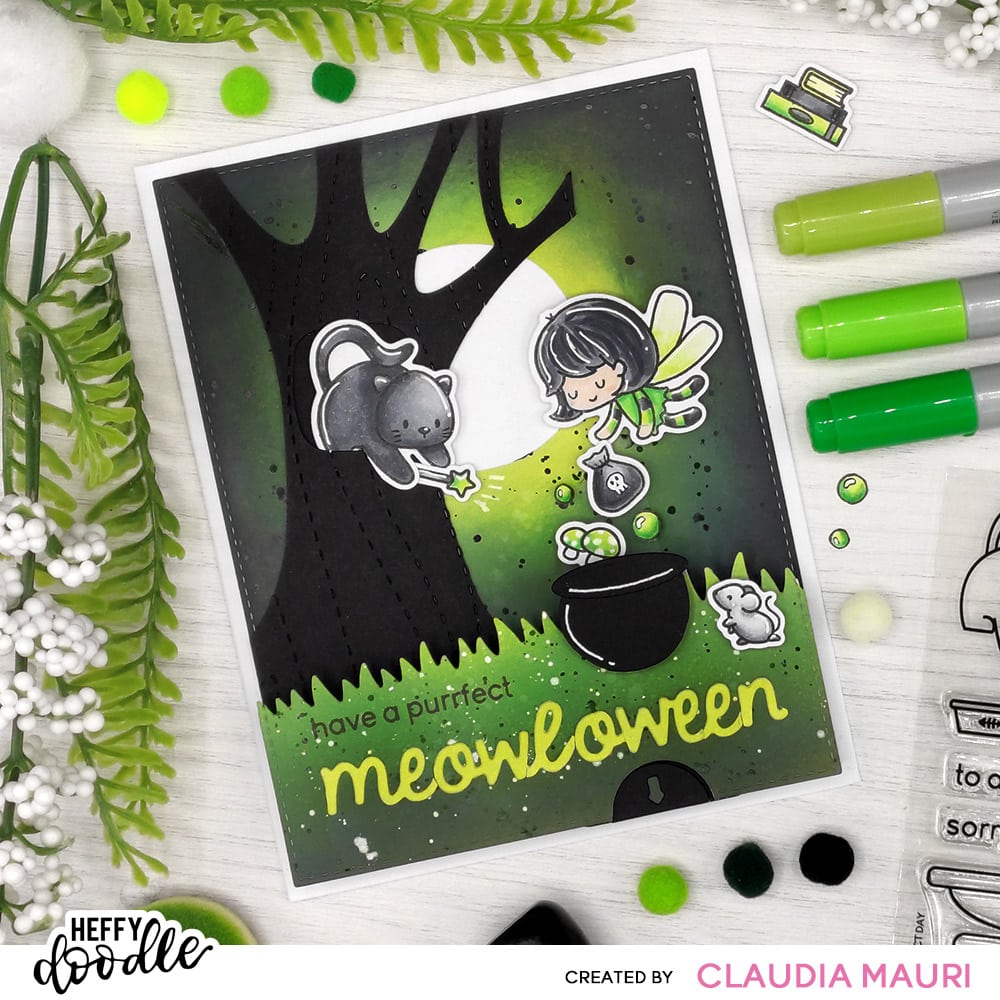 Now to the interactive part! I cut the Mini Double Slider mechanism out of black cardstock, along with one tab; I also cut out two other tabs from clear acetate. I assembled the mechanism and attached:

I made it this way so that, when the mechanism is closed, the poison stuff can be seen on the card; when the tab is pulled, magic happens and they will disappear behind the grass while the cute cat will pop up from the cauldron! Cutie cat is lonely no more, yay!! 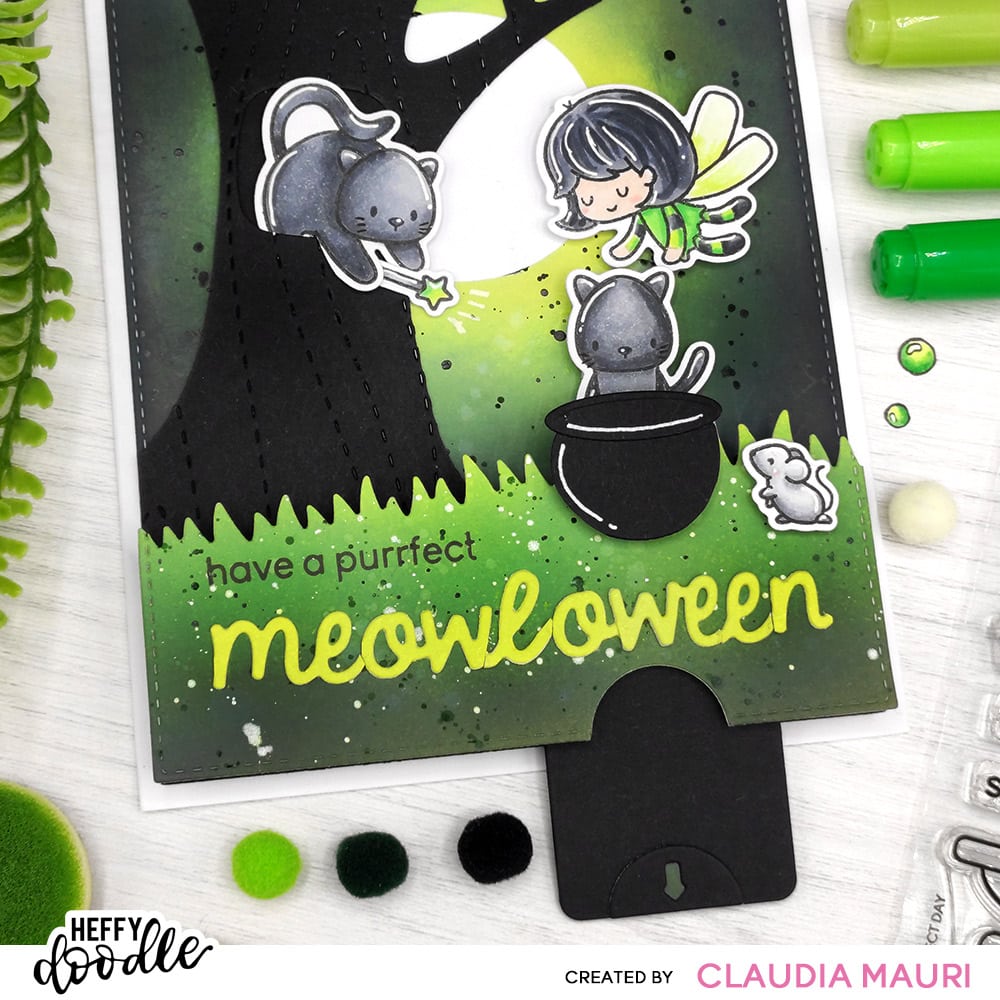 Speaking of the cauldron, can you guess how I made it? Believe it or not, it’s made using the bear die from the Bed Heads coordinating die and the oval shape from the Hot Air Balloon dies. No magic here, just a bit of crazy imagination LOL

Same happened with the Meowloween word: I ink blended a piece of cardstock with Distress Oxide Twisted Citron and die cut both the Awesome and Rainbow Builder Heffy Cuts twice. I cut out the letters I needed, they were all ready except for the L that I created by simply cutting out a little piece from the Rainbows B. Curious about this technique? With a bit of imagination, you can create any word you need: go check what I made for this card! 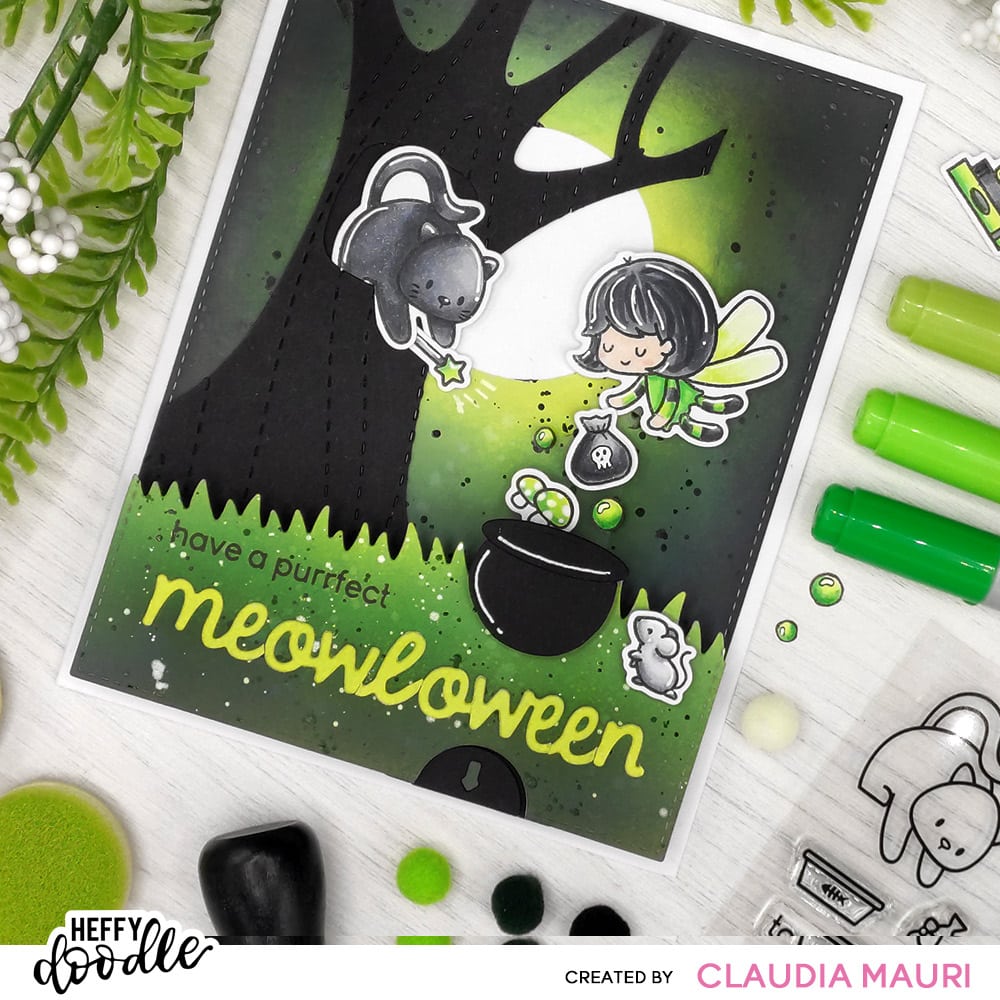 Now that everything was ready, I just had to stamp the “have a purrfect” sentiment from the Purrfect Day stamp set and assemble the whole card. I used foam squares for the images and two layers of Heffy Doodle deep foam tape and 3mm strips for the slider part.

I hope you enjoy my card and feel free to comment if you have any question.