Hello, Tallie here. I’m back today with a very different card for my usual style. I had to create an adult masculine birthday card – probably one of the most difficult themes for me – so I decided to push myself with a one layer scene, some no-line colouring and a lot of making it up as I go along! 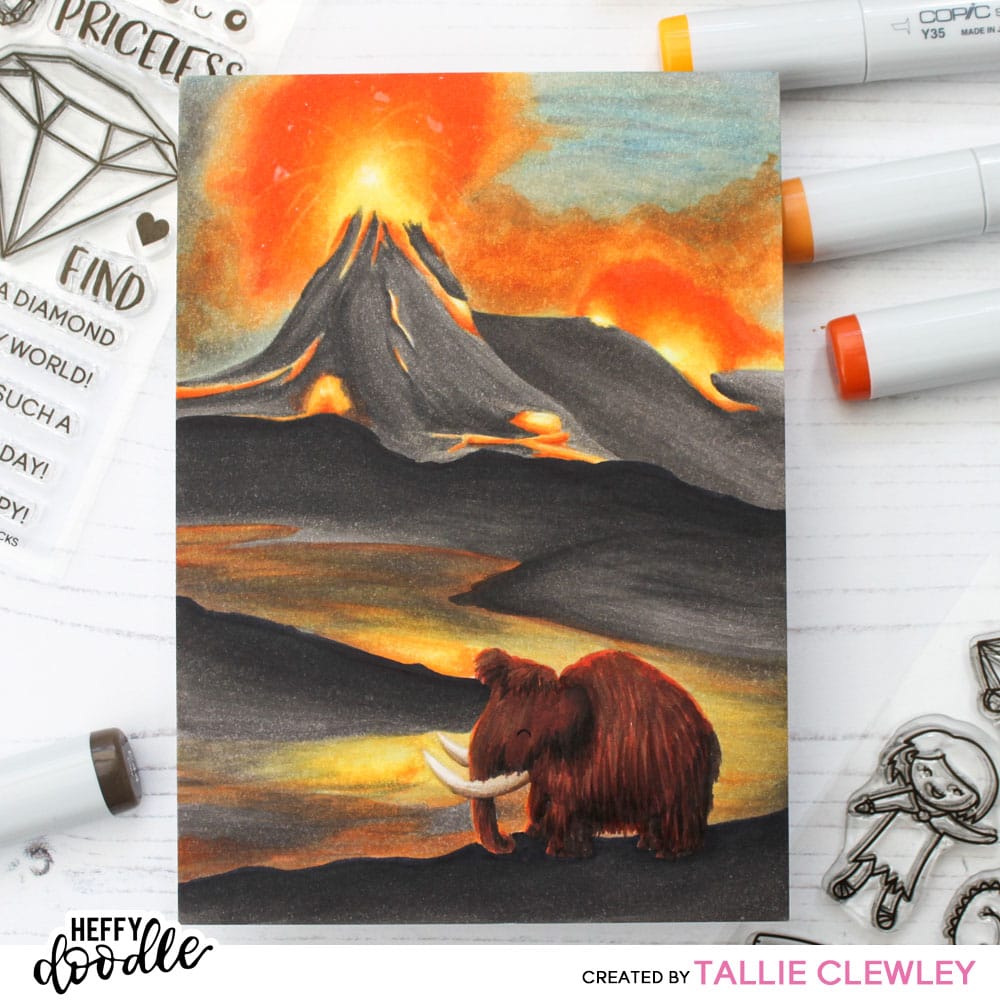 The key to creating scenes like this is to select a few key elements that will be the main features. For this card, I picked the Mammoth from Prehistoric Pals and the Volcano from Geology Rocks. Imagine Ice Age with an erupting volcano, with Manny looking on from the distance, glad he was far, far away. 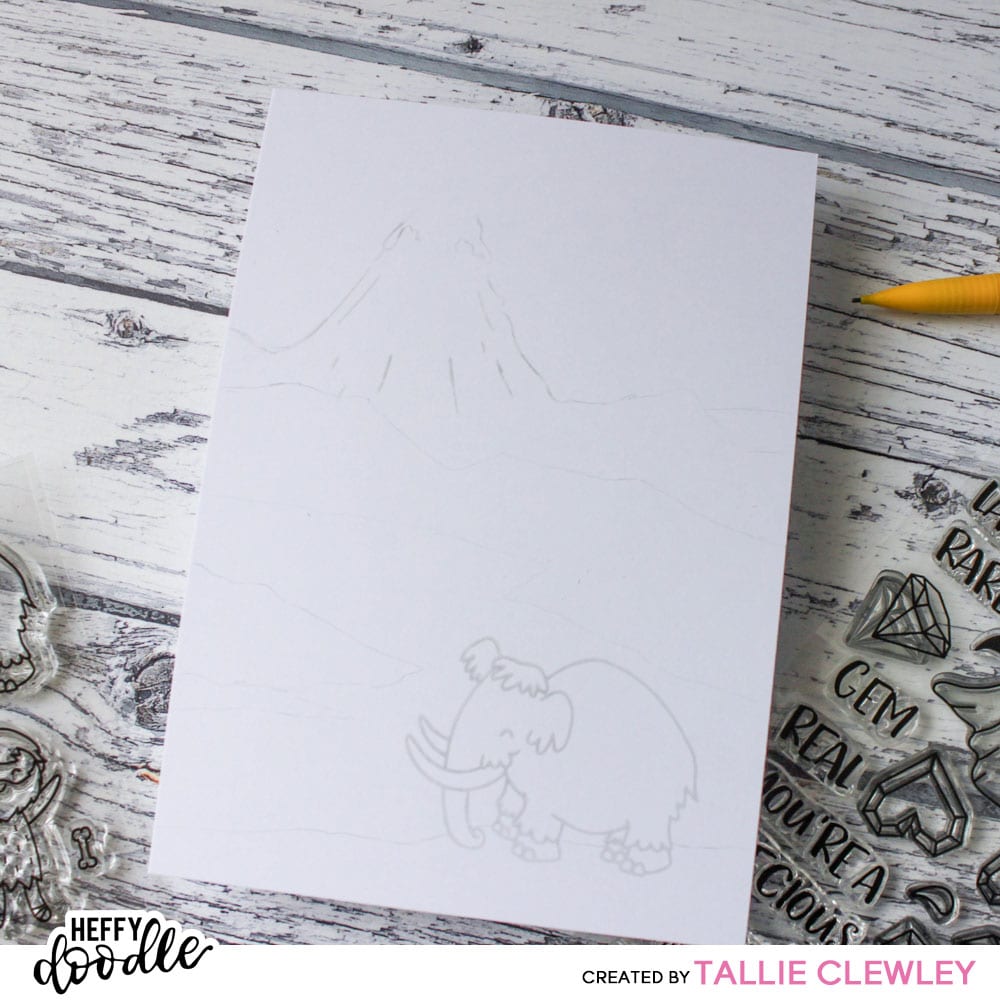 I stamped out the scene elements onto some Alcohol friendly cardstock in some light ink (I chose Lawn Fawn Jelly Fish ink as it is my favourite for no-line colouring) and roughly sketched in some pencil lines for the other background elements. I kept to the rule of thirds for this layout, with the mammoth and the volcano in the top and bottom thirds of the card panel. The middle third is made up of a a river, just behind the cliff the mammoth is standing on. 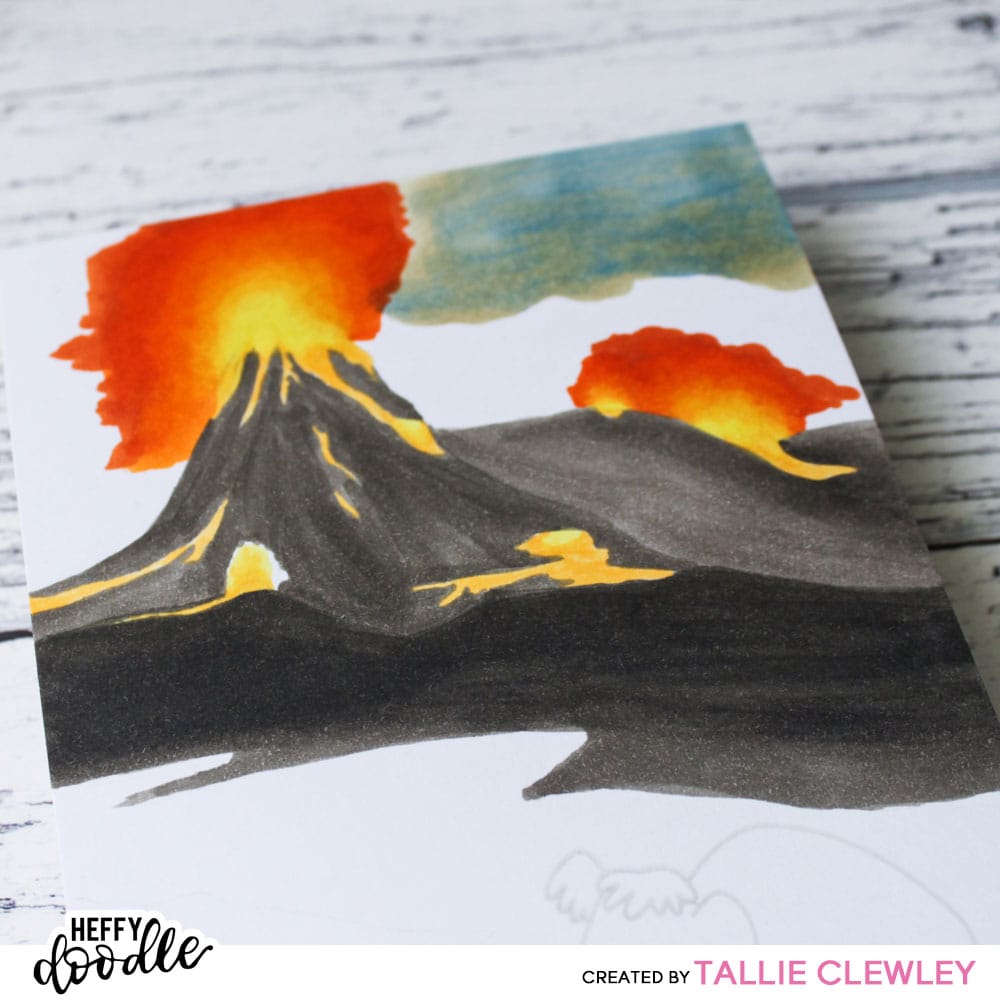 The next part involves colour blocking the key parts of the image. It is a little scary because it looks rubbish right up until you’ve put on quite a few layers and got the blending sorted! Just compare the picture above with the picture below – keep going and it will work out. The important thing is to put in the contrast, mapping out the extreme lights and darks. I chose some bright, firey reds, oranges and yellows for the lava and some dark, warm greys for the land and rocks. 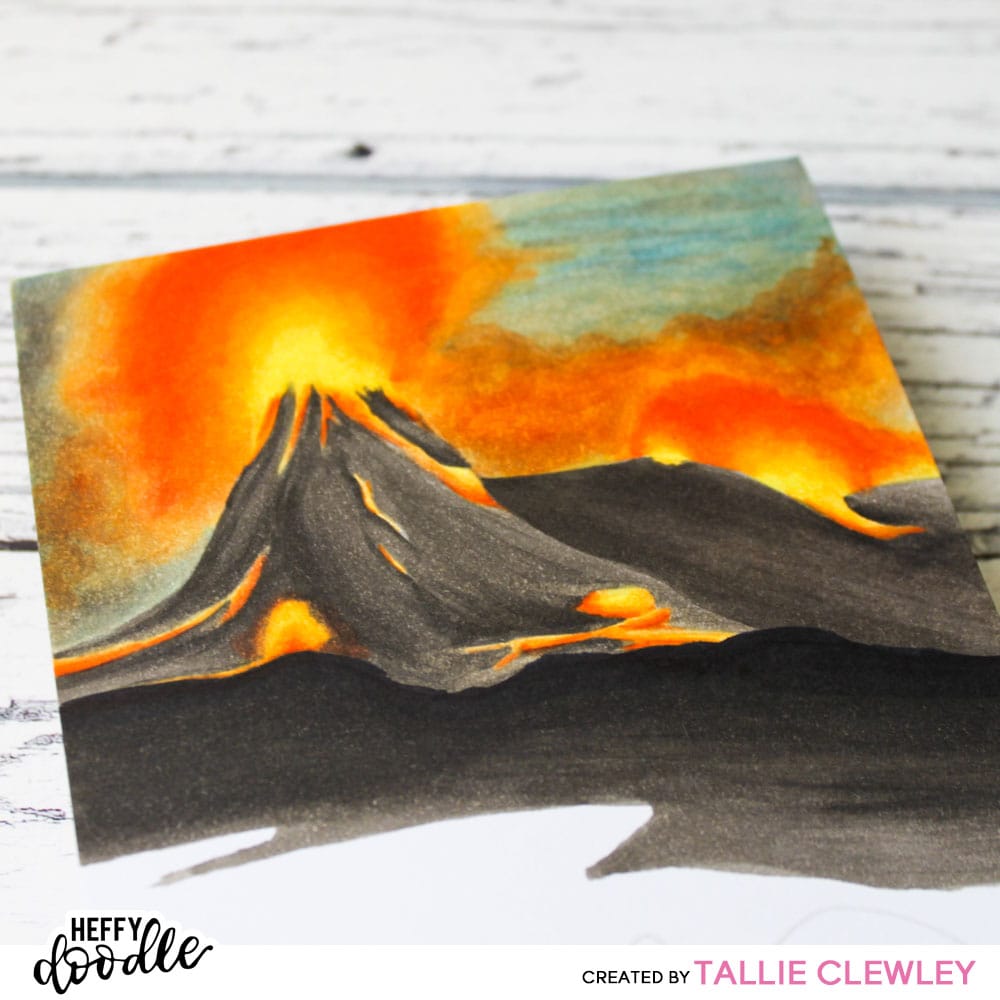 Getting closer to the foreground, there would be a lot of reflection from the lava on the lake. Again, I blocked in the shapes and colours before blending it out with lots of layers. For the parts of the land that would be more in shadow (i.e. the band of hills across the middle), I used a black marker to get that increased contrast.

I made sure to add in the two light reflections of the very hottest part of the volcano on the water’s surface. The colourless blender (or 0 marker) can help to wick away any ink if you’ve been heavy handed here. 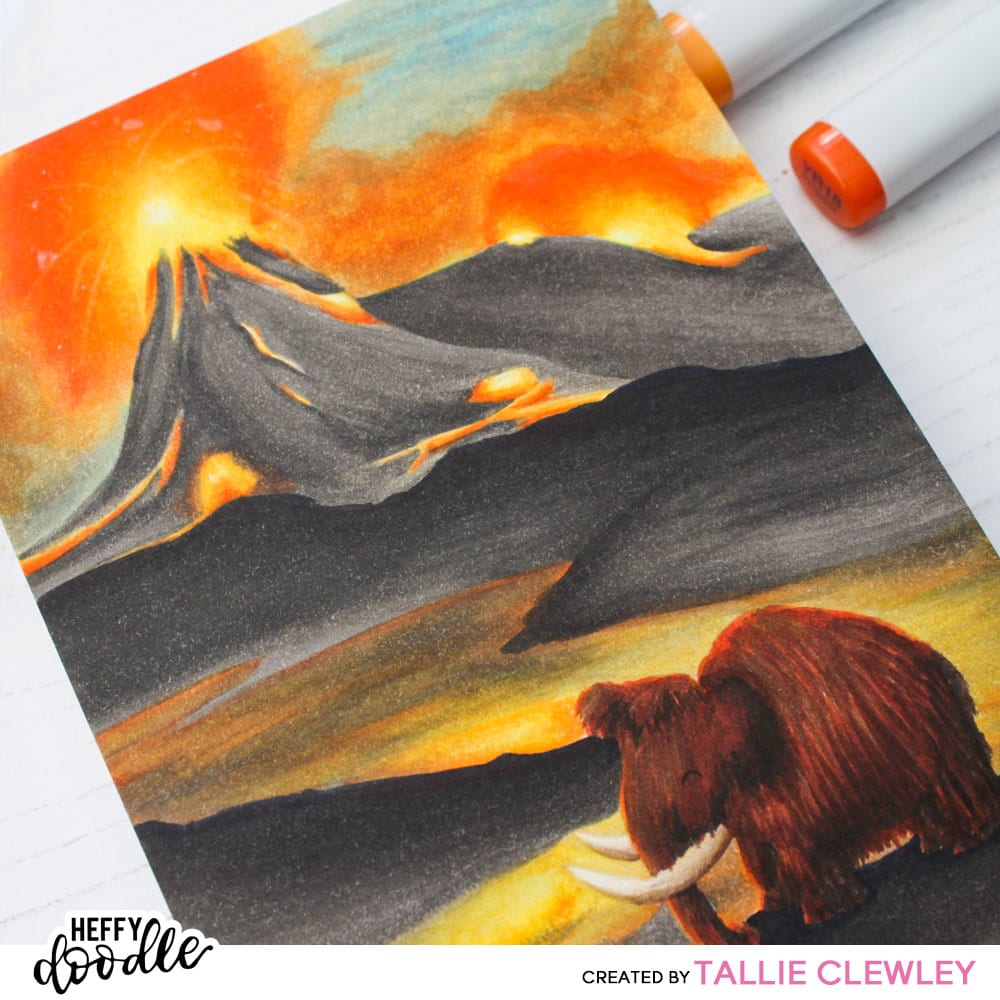 The final part of the scene is the mammoth. Whilst he technically would be totally in shadow, I wanted to colour him in with enough light that the detail of his shaggy coat could be seen. I started out by adding a little section of lighter orange around those edges that would pick up the reflected lava light from the background. Using lots of small strokes, I used several brown and red markers to fill in his coat. 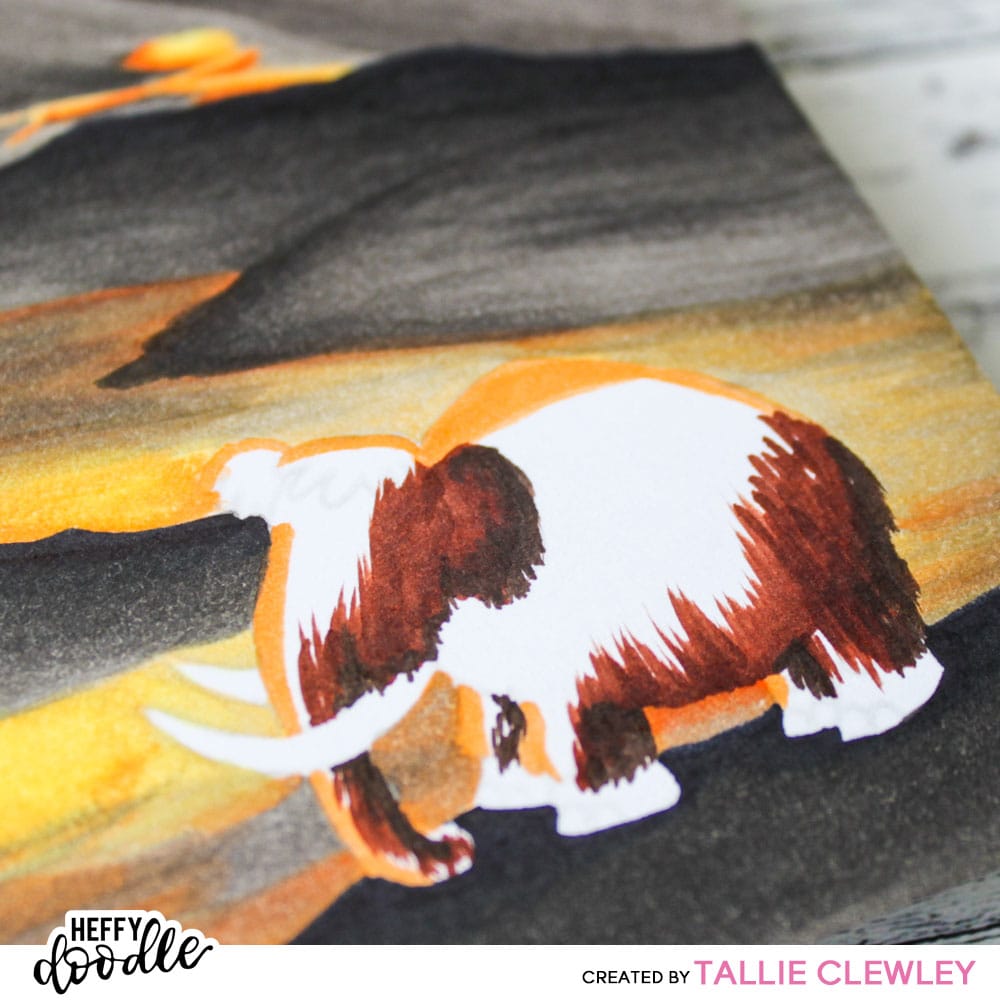 It looked a little flat so I added some detail to add some movement to the lava. Using my blender marker, I carefully wicked away some of the ink in the darker sections to create lava rock trails from the exploding cap. I smudged some white gel pen to create bigger boiling rocks. 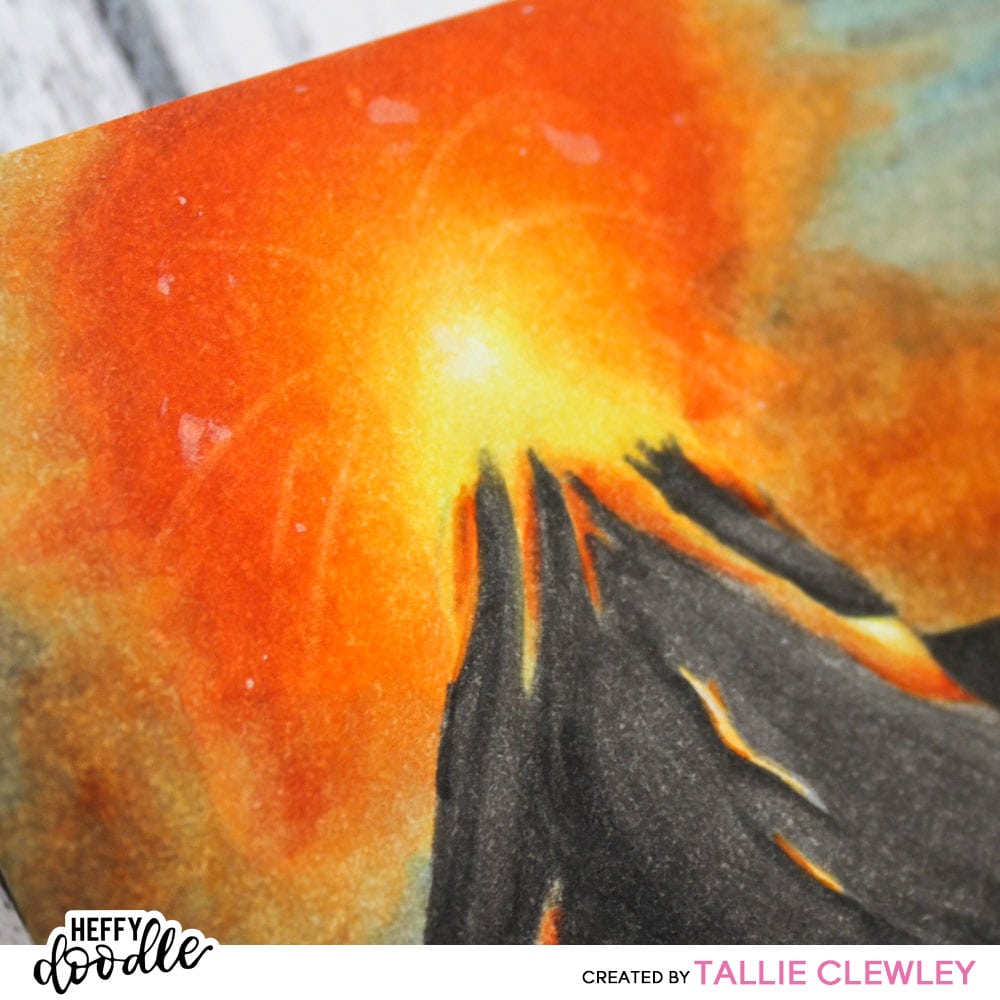 I love the way this scene came together and it’s a perfect adult masculine card. It’s not perfect – there are a couple of places where I could add more contrast or shadows, but I think the scene works well as it is.

Challenge yourself and select a few Heffy Doodle stamps to create your own scene! 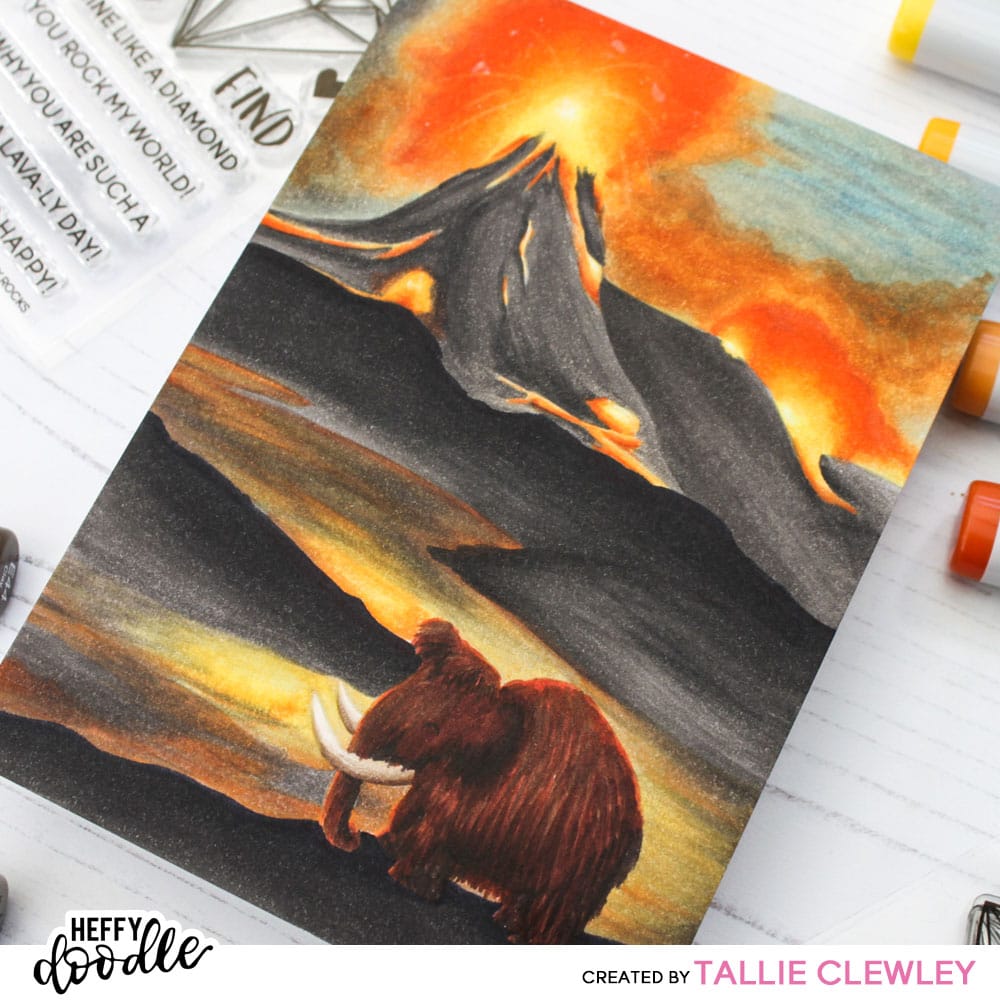